On this project our client wanted an audio system that would simply “ROCK”! He wanted to be heard no matter where he as but more importantly he wanted to be able to clearly hear his music while underway. On this build we went with JL Audio MHD Amplifiers and JL audio M speakers throughout. The system was driven by a Fusion Apollo touch screen receiver along with multiply remote controllers.

The Fusion receiver was mounted down below in the cabin where the old unit sat. This unit would not only allow for phone integration via Bluetooth but would also give him a multi zone setup where he could independent control the helm, the cabin below, and the transom. The old unit was much smaller than the Fusion receiver, so a black acrylic plate was made to hide existing holes and provide a solid mounting surface for the new receiver.

To ensure the captain could hear the highs just as well underway we added a set of tweeters to the helm. This not only gave him crystal clear high range audio, but it also gave him perfect stereo. Also located in the helm was a Fusion remote controller. This gave him control of multiple zones as well as volume and source selection.

In addition to being able to hear his music in the boat he wanted to be able to jam out while in the water as well. We installed a second set of M880 speakers on the transom and wired them up to a separate zone to give him independent control.

Lastly for the speaker setup was replacing the worn factory sub with a JL M series 10 inch woofer.

To ensure the speakers had plenty of power a set of JL MHD amplifiers were installed in the cabin below. These amps are designed to deliver tons of power while staying extremely efficient with power consumption. Perfect for ensuring your batteries hold up for all day play. 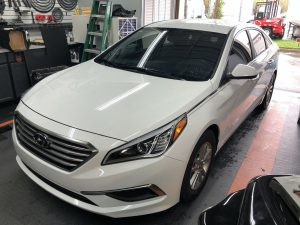 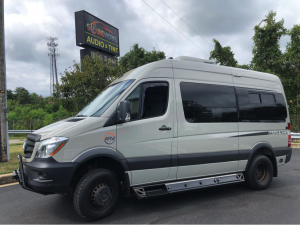 Talk with one of our experienced technicians about your project. Contact us today.